As part of the original concession documents during the port privatisation, the port authority (AGP) required that remedial works be carried out to the existing quay walls. CGR has completed the analysis of several of these walls and has proposed economical solutions which have been accepted by the AGP.

Terminal 4 had acquired new Liebherr LHM 600 Post Panamax mobile harbour cranes for operation at the site. These cranes are significantly heavier than the LHM 400 and LHM 500 for which the earlier quay wall strengthening measures were designed and installed.

A new quay wall stability analysis was undertaken by CGR, taking into consideration the loads imposed by the existing LHM 500 and the new LHM 600 Liebherr mobile harbour cranes, in combination with other operational loads that will act at the quay.

The need to install additional quay wall soil anchors at the southern side of Pier 4 was identified as a result of this new study.

The works were tendered and awarded under a design and construction scheme, using the FIDIC Yellow Book Conditions of Contract (Spanish Version) and were successfully completed in May 2012. 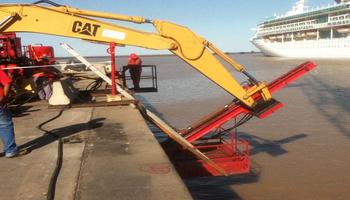