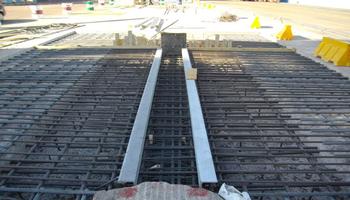 The existing wharf at Aqaba Container Terminal (ACT) was constructed in the early nineteen-eighties and has been fitted with an 18m crane gauge. The wharf is 540m long and comprises of 4 modules. In order to operate efficiently and to be able to accommodate larger vessels, ACT needed to procure and operate larger quay cranes, operating on a larger 24m gauge.

CGR was commissioned by ACT to undertake a structural analysis of the existing wharf to determine whether it has sufficient capacity to withstand the loads of the proposed new cranes. CGR has carried out the detailed back analysis of the existing wharf structure and determined that 3 out of 4 existing modules have sufficient capacity to carry the new cranes loads on the wider gauge. It was further determined that the fourth module required additional extensive strengthening works in order to carry the new crane loads.

CGR was also commissioned to prepare the tender documents and carry out the tender administration and assessment of the tenders submitted for the rail retrofit works on the 3 existing modules.

The works involved breaking out the existing concrete beam and surrounding deck, cutting out the reinforcement where necessary to install the new rail trench, fitting new reinforcement around the rail trench to reinstate the deck capacity, concreting works and the installation of the new crane rail and all associated fittings. CGR was the `Engineer` for these works completed under a FIDIC Red book contract.

The works are now complete and ACT has commissioned CGR to continue the design and installation of the new carne rail for the fourth remaining module. This requires additional piling works, which are taking place within the new wharf extension project scheduled to be finished in 2013.