Tecplata Container Terminal is a new modern container terminal which was constructed within the limits of La Plata Port in the province of Buenos Aires, Argentina. La Plata Port is located approximately 60km south of Buenos Aires between two municipalities, Ensenada and Berisso. Tecplata is located in Berisso municipality in a zone bounded by the Central Dock, the Santiago River east and the Saladero Canal.

The existing quay and some parts of the site were previously occupied and operated as abattoirs and later as general cargo facilities. Surrounding the terminal are low volume operational industrial facilities and some structures and areas which have been identified as being of historic value by the government.

The works required for the development include demolition of the existing quay structures, localised dredging of the berth pocket, reclamation and earthworks, filling works, rock revetment bunds, ground treatment and stabilisation, construction of 850m of quay, the construction of approximately 40 hectares of container stacking yard, access roads, buildings and other facilities associated with the terminal operation. The site was developed in sections to suit the trade demand.

CGR`s commission included the preparation and development of all master planning layout drawings, preparation of the contract documents, development of the outline and detailed designs and project management and construction supervision associated with the civil infrastructure works. 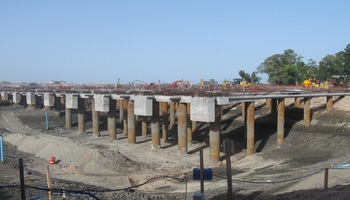