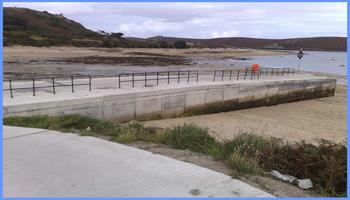 The Isles of Scilly are archipelago of small islands off the south west coast of Cornwall, 25 miles from Land’s End. There are five inhabited islands: St Mary’s, which is the main island, Tresco, St Martin’s, Bryher and St Agnes. None are over 4 km wide and all are separated by short distances over mostly shallow seas.

The islands rely on sea transport for the movement of people and freight and each island has at least one quay. These are small structures, mostly less than 40 m long and 6 m wide, constructed during the first half of the 20th century. They were designed for smaller vessels and lower volumes of traffic There are on-going safety risks due to the lack of adequate separation of freight and passenger handling areas and the more exposed quays also suffer dangerous conditions during storms and high swells.

The Duchy of Cornwall, who own the islands, commissioned John Martin Construction under a Design and Construct Contract to refurbish the quays on three of the islands to improve operational safety and reduce maintenance. Cullen Grummitt & Roe (CGR) was involved with this project as the Contractor's Engineer and carried out the detailed design work for the four Off Island Quays Renovations.

The four quay renovated were:

The scope of works required at each site varied but the overall project works included the lengthening and / or widening and general upgrading of the piers. In most cases the work included increasing the level of the deck of the structures to provide better access to the islands during the range of sea conditions which are experienced at the sites.

For all quays except Anneka’s, a common solution was provided.  This involved building a new quay wall from prefabricated concrete block units which were anchored to the bedrock using post tensioned bars and connected to the existing structure using precast deck planks. Additional wave protection was provided at Porth Conger Quay and Higher Town Quay by extending the existing wave wall.