CGR was originally commissioned by Sea structures in 2003 to investigate options for constructing a new 150m wharf at Debden, located on the Eastern bank of Barking Creek. The site at Debden then changed ownership but the new owners continued with the project. The current owners, McGrath Bros. Ltd pushed forward with development and completion of the first stage of the new wharf was achieved in early 2007. The site is currently used for concrete batching and recycling waste materials and the primary purpose of the wharf is to allow McGrath Bros. to transport aggregates and recycled materials by barge along Barking Creek and the River Thames.

The new wharf structure comprises of 30 tubular steel piles, 927mm in diameter, driven into the silty clay and medium dense sands of the Lambeth Group. The piles support reinforced concrete cast insitu beams, which in turn support a reinforced concrete deck consisting of both precast panels and a cast insitu deck slab. CGR carried out the outline and detailed design for the new wharf ensuring that it was capable of supporting a 50kN/m2 live load in-conjunction with a 100 tonne crawler crane and a 50 tonne fork-lift.

To allow the construction of this wharf structure to proceed, extensive stabilisation of the alluvial silts and clays was carried out. CGR commissioned and supervised a site investigation, and the subsequent installation of CFA piles into the soft clays. The temporary works to stabilise the banks of Barking Creek proved to be a very challenging exercise, and several stabilisation solutions were considered by CGR including a steel sheet piled wall and ground anchors. The completed stabilisation works allowed CGR to design a rock revetment slope and drainage outfall to accommodate existing drainage from the site, which met the Environment Agency requirements for increased flood storage capacity.

CGR was involved with this project from conception through to construction. CGR was responsible for carrying out the entire outline and detailed design works, along with the production of the associated planning, tender and construction drawings and the supervision of construction. In particular, CGR was commissioned to assist with gaining the necessary approvals for construction from the Environment Agency and the Port of London Authority. 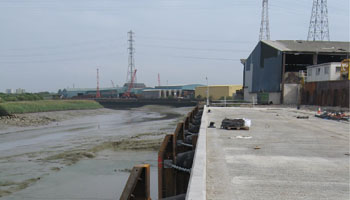