Cullen Grummitt & Roe undertook the investigation into the stability of the quay walls for Piers 1 and 2. The investigation considered a range of loading conditions, water levels in the Rio de la Plata and water table levels behind the wall.

The quay walls consisted of a mass concrete gravity wall with granite facing, and were constructed with two rows of drains, which were known to be blocked. The most economical solution was found to be a combination of quay wall anchors and cleaning of the top row of drains. Cleaning the drains involved excavating behind the wall to the level of the top row of drains, installing new pipe drains through the existing mass concrete walls and backfilling with free-draining gravel enclosed in a geotextile. The heavy duty pavement was reinstalled on completion.

The quay wall anchors were passive anchors, and were installed by drilling an inclined hole from the outside face of the wall, and grouting a steel tube.

The Terminal remained operational during the repair of the quay walls. 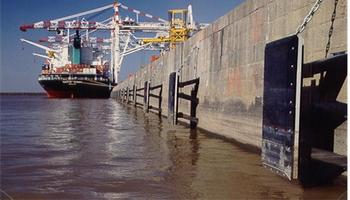