CGR was commissioned by Tarmac Southern Limited to undertake a condition survey of an operational wharf on the River Thames at Charlton, London.  This followed Tarmac’s review of previous survey work carried out by CGR for another Client.

The structure is a piled suspended concrete deck that has undergone extensive refurbishment and upgrading since its original construction.  Supporting steel piles included tubular and sheet piled box sections both with and without a concrete infill.

In combination with the visual inspection, a series of non-destructive thickness tests were undertaken on all the steel piles.  This was required in order to determine the approximate extent of corrosion of the piles.  The condition of the piles was an important consideration in the operation of a large mobile crane on the deck of the wharf.

The final report included a photographic record and full description of the structures that form the operational wharf.  Included in this package was a full set of sketches developed from site measurements.  Recommendations were made for remedial works to the wharf and monitoring requirements for the main jetty structure. 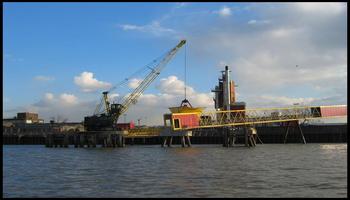