As part of our ongoing work at New Ross, CGR was commissioned to provide an inspection and condition survey of two wharves. Both wharves are suspended concrete deck structures supporting rail mounted bulk unloaders.

One wharf is constructed using several different sections with part of the suspended deck being uniquely supported by an old barge. The other wharf is of a more conventional type with regular pile sizings and regular spacing of piles.

An above and below deck inspection was completed by CGR‘s engineering team.  This included a detailed photographic record and a review of existing drawing information.  An assessment was then made on the condition of each of the structures and their suitability for new crane loadings from mobile cranes.  A review of the existing fenders was also undertaken during the survey and this data was added to the final report which identified areas requiring urgent repair.

The final report included wharf plans indicating the areas of deterioration along with corresponding photographic records which will define a baseline for future surveys.  Recommendations were also made for ongoing maintenance, monitoring and further structural analysis. 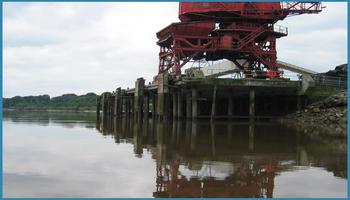