The fendering system at Raheen Wharf at New Ross, Ireland was installed when the wharf was constructed over 25 years ago. These fenders have performed well during their life however damage had occurred to the units due to normal operational wear and tear.

The fendering system consisted of five fender units, each of which was constructed from three timber fender piles connected with a substantial timber frame. Three cylindrical fender rubbers were located between the timber fender arrangement and the wharf structure.

The main damage was being caused by the belting on the berthed vessels catching on the fenders. The damage then occurred as the vessel was either lifted with the rising tide or dragged down with the falling tide.

CGR was commissioned to review a replacement fender design. This proved to be inappropriate and CGR developed an alternative design that maximised the reuse of the existing fenders and which allowed for the installation of new vertical timber panels on the front of the fender frames to prevent the belting catching on the facing timbers.

Following the client and the harbour master’s approval of the alternative design, CGR prepared tender documents and called tenders for the repair of the fenders at Raheen Wharf. 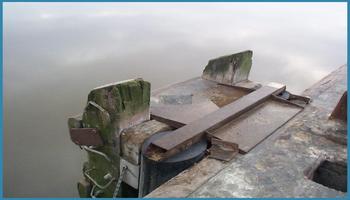