The development of Nhava Sheva International Container Terminal, designed and supervised by CGR during construction, involved the taking over and incorporation of 150m of this existing 680m berth.  Significant concrete cancer existed in the soffit of almost all headstocks and pile capitals of this section of wharf.

The existing headstocks and pile capitals are subject to wetting during high tides.  Inadequate concrete cover to reinforcement, and poor concrete compaction resulted in significant rusting of main reinforcement bars and ligature steel, and concrete decay in a facility that was a little over 10 years old.  Immediate repairs were necessary to avoid any catastrophic failure of the headstocks as the wharf was still under the operation of quay cranes and ship berthing.

Cullen Grummitt & Roe inspected the existing facilities, developed a repair specification and undertook budget costing and tendering of the repair works.  The repairs involved the removal and cleaning of spalled concrete and corroded reinforcement, epoxy coating of these areas, reinstatement of reinforcement where significant corrosion existed, reinstatement of concrete using guniting methods, and the overall coating of the headstocks with an epoxy protection system to ensure the long term durability of not only the areas repaired, but the entire headstock system.  Of note, all works were undertaken while the wharf was largely still operational.

NSICT has been operating very successfully since 1999. 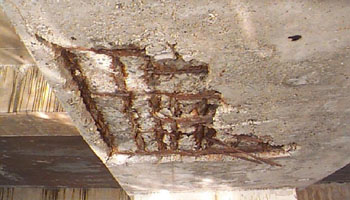