The new beam construction works were required to be completed in harmony with ongoing straddle carrier operations at the terminal. CGR prepared a preliminary design for the works and consulted with both local and international contractors to assess the preferred piling methods for the project and to determine indicative project costs. Detailed consideration was also given to the interaction between the construction works and the terminal operations to ensure the works had minimal impact on the ongoing operations. The project was to be staged with 300m of rear crane beam to be constructed in 2004 and with a further 300m to be developed in subsequent years.

A bi-lingual report detailing CGR’s design solutions and the indicative project costs was prepared and presented to the client. GMP proceeded to negotiate with the port authority over the installation of this new crane beam. 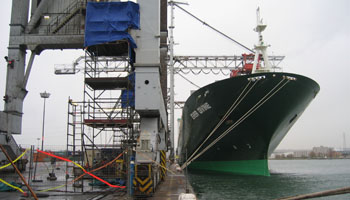