The Ok Tedi mine is located in the highlands at the western end of Papua New Guinea. Copper concentrate from the Ok Tedi mine is loaded onto barges at Kiunga, on the Fly River, for transport down the Fly River to the coast. The loading wharf at Kiunga consists of a tied sheet pile wall. During the drought in the highlands of PNG in November 1997, a flash flood caused the loading wharf to collapse, preventing the loading of any product from the mine.

CGR was retained by GAB Robins to provide engineering advice on the method of repairs and the cost of the repair work.

The first task was to construct a temporary ship loader as a matter of urgency, to allow the loading of product from the mine.

The rectification works for the loading wharf involved the installation of a row of tubular steel piles behind the wall, cutting the steel sheet piles at the bed level of the river, then straightening and re-welding the piles. In its rectified condition, the quay-line of the wharf was displaced approximately four metres into the river. This necessitated the lengthening of the ship loader gantry. 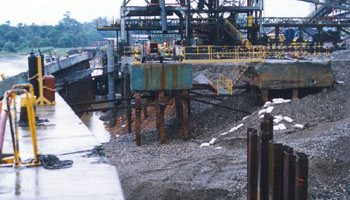